The life of Bram Stoker 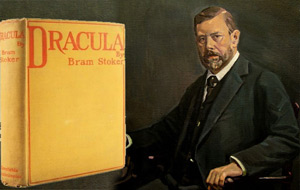 Abraham “Bram” Stoker (8 November 1847 – 20 April 1912) was an Irish novelist and short story writer, best known today for his 1897 Gothic novel Dracula. During his lifetime, he was better known as personal assistant of actor Henry Irving and business manager of the Lyceum Theatre in London, which Irving owned.

Before writing Dracula, Stoker met Ármin Vámbéry who was a Hungarian writer and traveler. Dracula likely emerged from Vámbéry’s dark stories of the Carpathian mountains. Stoker then spent several years researching European folklore and mythological stories of vampires. Dracula is an epistolary novel, written as a collection of realistic, but completely fictional, diary entries, telegrams, letters, ship’s logs, and newspaper clippings, all of which added a level of detailed realism to his story, a skill he developed as a newspaper writer. At the time of its publication, Dracula was considered a “straightforward horror novel” based on imaginary creations of supernatural life. “It gave form to a universal fantasy . . . and became a part of popular culture.”

According to the Encyclopedia of World Biography, Stoker’s stories are today included within the categories of “horror fiction,” “romanticized Gothic” stories, and “melodrama.” They are classified alongside other “works of popular fiction” such as Mary Shelley‘s Frankenstein: which, according to historian Jules Zanger, also used the “myth-making” and story-telling method of having “multiple narrators” telling the same tale from different perspectives. “‘They can’t all be lying,’ thinks the reader.”

The original 541-page manuscript of Dracula, believed to have been lost, was found in a barn in northwestern Pennsylvania during the early 1980s. It included the typed manuscript with many corrections, and handwritten on the title page was “THE UN-DEAD.” The author’s name was shown at the bottom as Bram Stoker. Author Robert Latham notes, “the most famous horror novel ever published, its title changed at the last minute.” The manuscript was purchased by Microsoft co-founder Paul Allen.

Stoker’s inspirations for the story, in addition to Whitby, may have included a visit to Slains Castle in Aberdeenshire, a visit to the crypts of St. Michan’s Church in Dublin and the novella Carmilla by Joseph Sheridan Le Fanu.

Stoker’s original research notes for the novel are kept by the Rosenbach Museum and Library in Philadelphia, PA. A facsimile edition of the notes was created by Elizabeth Miller and Robert Eighteen-Bisang in 1998. After suffering a number of strokes, Stoker died at No. 26 St George’s Square on 20 April 1912. Some biographers attribute the cause of death to tertiary syphilis, others to overwork. He was cremated, and his ashes placed in a display urn at Golders Green Crematorium.